About our Vintage Campers: The Silver Streak Supreme Rocket

Calling all Vintage Travel Trailer fans!  Here’s the background on some of our iconic and historic campers you can stay in.

The Silver Streak Supreme Rocket is one of the most incredible travel trailers ever made.   The most famous Silver Streak is probably the one that Andy Kaufman owned and lived in while shooting “Taxi.”  Jim Carrey stayed in it while filming “Man on the Moon,” and it gets a lot air time in the documentary “Jim and Andy.” Sotheby’s auctioned it after the film, I wasn’t able to find out how much it went for.  But these were high-end luxury campers in their time, mostly custom order/custom built – and are still considered better built than the Airstream.

Two men, Frank Polito and Kenny Neptune, each of whom had previously worked for McDonald Douglas Corp, founded the Silver Streak Trailer Co. in approximately 1948. The first trailer was delivered in 1949. The factory was in South El Monte, CA. In 1986 another company wanted to buy the land the factory was sitting on. Polito and Neptune sold the land. At the time that Pollito and Neptune sold the land the factory General Manager was Rolf Zushlag. The partners had hired Zushlag from Airstream in 1978. Zushlag made a deal with the two partners for patterns and all machinery. He stayed at the South El Monte site for 12 to 14 months and then found a place in Chino, CA. There were no l987 models manufactured due to the move. Zushlag continued building custom built Silver Streaks until 1997. Both founders are still alive and live in the Los Angeles area. Mr. Zushlag, after closing the factory, is still active in the Los Angeles area in other business activities.

The company came out with the Sterling series trailers in 1985. This trailer had black trim and the gold trimmed trailer was discontinued. Silver Streak never built over 6 trailers per week. There was a national Silver Streak organization from 1968 to 1997. It was officially disbanded at the St. George, UT National rally when only 28 trailers showed up. There is still a Houston area club and they are planning a Regional rally at Burnett, TX between San Antonio and Kerrville this year on May 6, 2000.

The vents on the side of the trailers were placed there as “weep” holes. They resulted in condensation inside the trailer in very cold climates. Mr. Ashby recommends caulking them closed. Mr. Ashby has numerous Silver Streak parts including Hadco axles and grease seals and aluminum segments for the front and rear of some models. 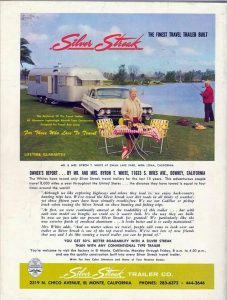 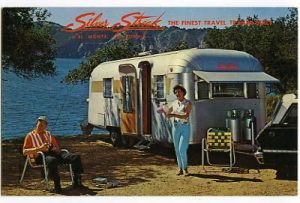