About Your Stay In a Historic Loggers Bunkhouse

Lincoln County, Montana is rich with Logging History.  The Logger and Ranch Hand Cabins were originally one logging bunk house from the J Neils Lumber Company.  It was abandoned and falling apart on our property when we purchased it.  The previous owners had considered burning it or taking it to the dump.  But after we uncovered the wood floors and walls, which had been covered by panelling and shag carpeting in the 60’s, we saw a new future for it, and our Glamping idea was born. 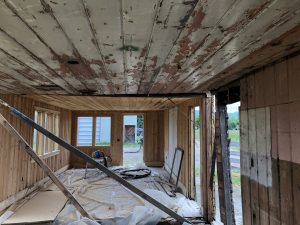 We chainsawed this old bunkhouse in half(!) added a panel of windows from the ranch house we are also renovating, and a large deck to each unit…sandblasted, refinished, and renewed this historic structure to share with you!

THE HISTORY OF LOCAL LOGGING CAMPS, via USFS:

Until the late 1920s, river drives were standard practice for moving logs to mills throughout the United States. Temporary camps were cost effective for the lumber mill owner. By placing men in a camp at the work site, men worked longer hours per day. Because of the large number of camps established at the same time, each temporary camp had a number to identify it.  There were both River Camps, and Railroad Logging Camps in the Eureka and Libby areas.

Railroad logging offered the possibility of using mobile camps, with buildings moved from site to site on railcars as logging progressed. Buildings the size of a railroad car, were designed to be either left on the car and parked on a siding or, more commonly, removed from the car and set beside the tracks for the duration of the camp stay. The buildings were set on skids like the donkey engines and arranged either parallel or perpendicular to the tracks. Mobile camps generally featured smaller bunkhouse units, bathing and laundry facilities, and sometimes a recreation building. Camps were located near water because the equipment required water for use.

People who lived in the family camps remember the time well. One person placed skids under his house to easily move it from camp to camp. Some remember school being held in a box car with the company paying part of the teacher’s salary (Shenefelt 1991: Thomas 1981.) After their use in camps, many families put skids under their houses and moved them into town or onto homesteads.

J. Neils Lumber Company continued to operate company camps into the 1950s. No records exist detailing the later camps, which were either stationary or mobile in design but probably similar to those from the 1920s. As transportation improved, more workers commuted to job sites and the use of company camps decreased. Log trucks eventually replaced railroad logging in 1936.

Camp buildings generally included a cook house, bunkhouse, a horse barn, a blacksmith shop, a saw filer’s shack, and an office. Water for men and horses necessitated camp placement as close as possible to a stream.

The bunkhouse had a door on each end and bunk beds lined the inside walls. Two men slept in each bunk bed; two on top and two on the bottom. A plank attached to the outside of the bottom bunk served as a bench. There was an inclined wooden trough in one corner for wash-up. A wood stove sat in the middle of the room between the rolls of bunks. Coffee was always heating on the stove. Hay wires stretched from wall to wall provided drying for socks, mittens, underwear, and outer clothes that made a very pungent smell.

Wagon roads usually provided access to the logging camps. Nearby towns supplied groceries. Camp cooks were essential in keeping loggers. It took three to four people to prepare the meals: the head cook, the baker, and at least one “flunky” who cleaned the dishes. Meals were substantial and served at set times during the day. The mid-day meal was served in the woods, rather than allotting time to return to camp. The lunch sleigh used for this purpose was in some places called a swing-dingle. It was common in logging camps to enforce a no talking rule during meals taken inside.

An article in the Intermountain Logging News reveals that the early day lumberjacks consumed at least 9,000 calories a day. An article in Nutrition Today-“Paul Bunyan’s Cook”, written by Dr. Alfaretta Clara Johnson Cooley, told about the meals-consumed by lumberjacks of northern Minnesota and Wisconsin.

The men (seated 12 at a table) started the day with oatmeal and top milk. The next course was cheese (1 pound per man) and molasses cookies, followed by pancakes, maple syrup, and large slabs of butter. Some stuffed a few pancakes in their pockets for snacks. The loggers then dug into several helpings of bacon and eggs plus bread spread with butter and apple butter. Dessert was a soup bowl of baked apples, stewed prunes, and lemons and raisins.